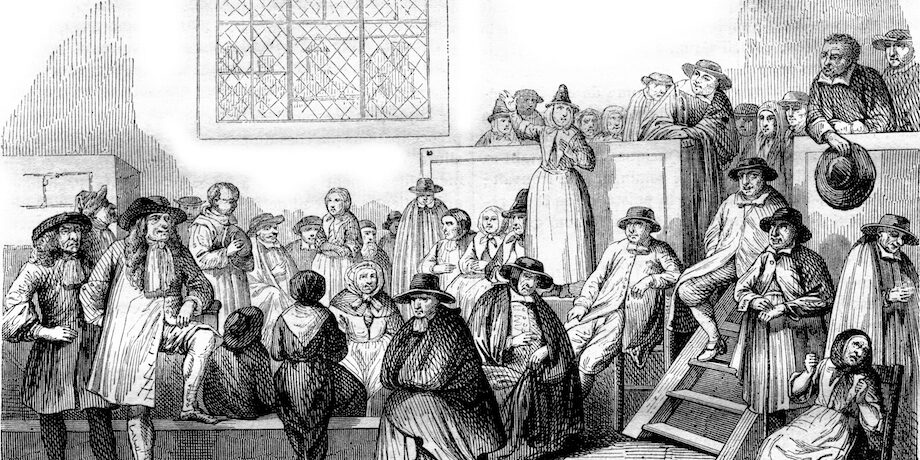 Religious freedom has been a watchword in the story of America from the beginning. After all, the Puritans who came to these shores were seeking the freedom of religious practice that had been denied them in England. And yet, from the start, the Puritans sought religious liberty for themselves, but didn’t think of religious freedom as the basis for a wide and diverse society. In Boston in the mid-1600s, the court ordered the first Jew in Boston to leave, prohibited Catholic practice, and banished Quakers and Baptists. Baptist Roger Williams and Quaker Anne Hutchison were exiled and settled in what is now Rhode Island, and four Quakers who remained in Boston were hung on Boston Common. In short, it was not a hopeful beginning for religious freedom.

By the time of the writing of the Constitution in 1787, however, things had shifted: freedom of conscience, freedom of religion, and the rejection of any state religion became the first principle of the Bill of Rights. It was no accidental omission that the Constitution did not include references to God or Jesus Christ. The relation of religion and the state had been discussed extensively and the separation of the two was critical to the founders. It is no wonder, then, that over the past two and a half centuries, the guarantee of the free exercise and non-establishment of religion became the blueprint for a society as religiously and culturally diverse as ours is today. Newcomers were not always warmly welcomed, as our history of exclusion and bigotry demonstrates. Nonetheless, the guarantee of the freedom to worship in one’s own way or not to worship at all has created one of the boldest of national experiments: a culturally and religiously diverse democracy.

Today one of the most contentious issues in the public understanding of religion is the clash between those who continue to see the United States as a “Christian country” and those who see the United States as a multireligious nation whose very foundation of religious freedom has made this a home for immigrants of every faith. This clash is seen most prominently in the increasingly public expressions of Christian nationalism and the increasing evidence of a vibrant multicultural and multireligious pluralism.

In the course of our history, the voices of both sides were raised in the context of immigration debates. There were nay-sayers, “Nativists” as they were called. They did not welcome newcomers – Irish Catholics, Eastern European Jews, Confucian “pagan” Chinese workers. In 1863, the National Reform Association proposed a Constitutional amendment affirming that Christianity is the basis of our republic. The new prologue would read, “We, people of the United States, humbly acknowledging Almighty God as the source of all authority and power in civil government, the Lord Jesus Christ as the Ruler among the nations […], do ordain and establish this Constitution of the United States of America.” This gained little traction at the time, but it was reintroduced several times, the latest in 1943. Short of changing the Constitution, every immigration debate became central to the expression of exclusionist sentiment from the 1882 Chinese Exclusion Act to the 1924 Immigration Act. For Nativists, the best solution to the diversity of peoples who wanted to come to the United States was to keep them out, a sentiment that has become virulent again today. 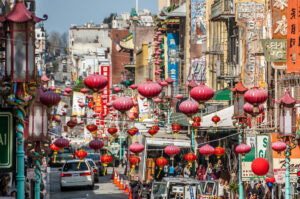 The 1965 Immigration and Nationality Act set the stage for a new day. The door to immigration was open once again, countering the racism implicit in U.S. policies and thereby correcting what President Lyndon Johnson called “an enduring wrong in the conduct of the American nation.” Not surprisingly, in the post-1965 period people came from around the world, especially from Asia, and brought with them their Bhagavad Gitas, Buddhist Sutras, and Qur’ans. At first, they gathered in homes and in rented halls. As they put down roots, they built Hindu and Buddhist temples, Islamic Centers and mosques, and Sikh gurdwaras. The free exercise of religion enabled a new phase of the peopling of America.

When Robert Bellah wrote his much-discussed piece “Civil Religion in America” in 1967, he suggested that America actually does have a national religiousness, despite the clear separation of church and state. He explained, “Although much is selectively derived from Christianity, this religion is clearly not in itself Christianity.” While it draws upon the west’s Jewish, Christian, and Biblical heritage, it is not any particular religion, but the broader and deeper religious ethos of our society. Bellah began with the great addresses of presidents from George Washington to Lincoln to JFK who articulated the  “religious dimension” of American experience. In speaking to the self-understanding of the nation, they speak of God to be sure, but none of these presidents mentions Jesus Christ or the Bible. Rather, America’s civil religion is based on an ethical consensus, “the subordination of the nation to ethical principles that transcend it in terms of which it should be judged.”

This American civil consensus, Bellah writes, was severely tested, to be sure. There were great crises in America’s ethical self-understanding that could have torn the republic apart. The Civil War was undoubtedly the greatest crisis, testing the fundamental issue of human equality. At Gettysburg, Lincoln recalled the founding moment when “our fathers brought forth on this continent, a new nation, conceived in Liberty, and dedicated to the proposition that all men are created equal. Now we are engaged in a great civil war, testing whether that nation, or any nation so conceived and so dedicated, can long endure.”

The Vietnam war, in the midst of which Bellah wrote, was another crisis of national self-understanding, as the nation succumbed to an “arrogance of power” untethered from an awareness that we, as a nation, stand under higher judgement. Bellah left it there, but now, more than fifty years later with renewed immigration, the religious landscape of the United States has changed in significant ways and we are in the midst of yet another crisis that tests the fabric of the nation. White Christian nationalism once again challenges the very diversity of religion, race, and culture that is America’s reality. It is nothing less than a challenge to the principle of Constitutional religious freedom and its concomitant religious diversity.

In his first inaugural address, Barack Obama articulated in a new key who “we” are in this era of wider immigration. “We are a nation of Christians and Muslims, Jews and Hindus, and nonbelievers. We are shaped by every language and culture, drawn from every end of this Earth.” It was the first time our breadth had been so explicitly acknowledged in a presidential inaugural address, and it was a breathtaking moment for those drawn in by that inclusive language. He went on: “And because we have tasted the bitter swill of civil war and segregation and emerged from that dark chapter stronger and more united, we cannot help but believe that the old hatreds shall someday pass; that the lines of tribe shall soon dissolve; that as the world grows smaller, our common humanity shall reveal itself; and that America must play its role in ushering in a new era of peace.”

Today’s growth of white Christian nationalism calls into question that optimism just as it calls into question the very foundations of our complex society. Those of us who have studied the growing connections of people of diverse backgrounds, the bridge-building that has taken place in cities and towns everywhere, see an emerging interfaith infrastructure that is the very hallmark of pluralism.

On the other hand, resurgent nationalism takes aim at pluralism and the very foundations of Constitutional democracy: religious freedom and religious diversity. Hadn’t they gotten the memo? Hadn’t they seen the overt evidence of our growing and confident diversity? Hadn’t they seen the mosques and temples in cities and towns all across America from sea to shining sea? Hadn’t they witnessed the growing participation of new immigrants in public life from school committees to city councils to the halls of Congress? Weren’t they moved to see Keith Ellison take his oath of office on the Qur’an that was owned by Thomas Jefferson or Tulsi Gabbard sworn into Congress on the Bhagavad Gita she had carried as an ROTC officer in Iraq? Either they didn’t get the memo, or they got it, took in the full scope of our diverse communities, and outright rejected it, embracing once again what Katherine Stewart speaks of “The biggest fraud of Christian nationalism – that the United States was founded as a Christian nation.” 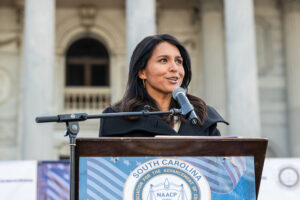 White Christian nationalism is the religio-political movement much on our minds in 2021, having watched the assailing of the U.S. Capitol with battering weapons, crosses lifted high, and “Jesus 2020” banners waving. White nationalism, militant and armed, is the aspect of the insurrectionists most reported on and easily documented. After all, most of them were white, to be sure, and race is still a deeply inciting issue. But we know that the braiding of white nationalism and Christian nationalism is an old story in the U.S., and it is clear the latter was also on the march on the January 6.

And there is a subtler text as well, such as that purveyed by Senator Josh Hawley of Missouri who was photographed giving a raised fist of encouragement to the mob that attacked the Capitol. He has spoken repeatedly of the need to return to the “social consensus” that has been the bedrock of our society, clearly meaning Anglo-conformist Christianity. He blames America’s woes on the “cosmopolitan elites” who are proponents of the multicultural America, quite aware of the anti-Semitic dog-whistle embedded in that language. These cosmopolitans, he says, also advance dangerous agendas of globalization, affirming that we are “world citizens.” That, of course, would include many of us who see America’s multireligious reality as an affirmation of our founding promise and globalization as an inevitable and necessary concomitant of the world in which we need to live responsibly.

In assessing the dimensions of religion in U.S. society today, we need to be wide-awake to the threats that come from within religious traditions themselves, fully armed with their political and economic agendas. Many forms of Christian nationalism overlap with the fear-mongering agendas of Stop the Islamization of America, the anti-Shariah law campaigns, and the Islamophobic aims of ACT for America. This requires being alert and educated about the forces that reject the multicultural and multireligious nation we have become.

Of course, there are countervailing Christian voices that divorce Christianity from Christian nationalism, for example the Christians Against Christian Nationalism campaign launched by the Baptist Joint Committee, endorsed by leaders of the major denominations and signed by thousands of laity. It won’t be enough, however, to demonstrate the ways in which this strain of nationalism is not Christian in even the most basic sense. Equally important, it is clearly not American and undermines both the spirit and letter of the Constitution.

The public understanding of religion is challenge enough, but equally critical for us now is the public understanding of the proper relation of religious faith – Christian, Jewish, Muslim, or Hindu – to our Constitutional belonging as co-citizens citizens of this democracy. Christian nationalism stands in stark opposition to the religious pluralism of America and to the covenant we all share as citizens in a Constitutional democracy. 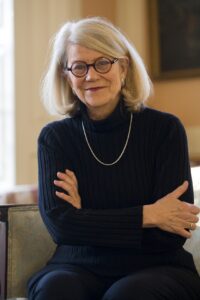 Diana L. Eck is Wertham Professor of Law and Psychiatry in Society and Professor of Comparative Religion and Indian Studies at Harvard University. She is Founder and Director of The Pluralism Project. Her work on religion and society focuses on both India and the United States. Her most recent books are A New Religious America: How a “Christian Country” Has Become the World’s Most Religiously Diverse Nation and India: A Sacred Geography.