From Deep Within – A Call to Serve 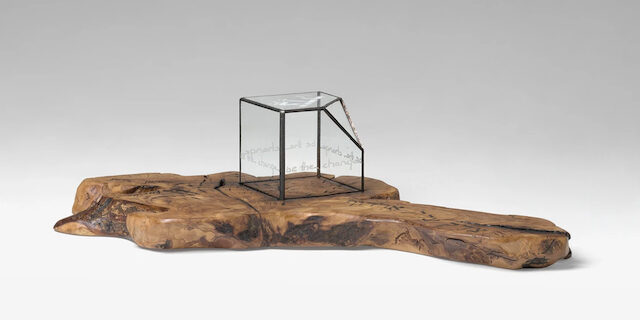 I have few memories of my beloved maternal grandfather, Harry. He died before my 7th birthday. But I remember how much I loved sleeping over at my grandparents’ house, or when they came to ours. Most of all, I loved when he tucked me into bed, and together, while covering our eyes, we would recite the Sh’ma. The Sh’ma is the centerpiece of the daily morning and evening prayer services, considered by some the most essential prayer in all of Judaism. An affirmation of God’s singularity and kingship, its daily recitation is regarded by traditionally observant Jews as a biblical commandment. I don’t know why, but I always felt a wave wash over and envelope me, causing some form of heart palpitations. What was that sensation and why was it so awesome?

As an adult, I feel that same sense of awe wash over me when I hear the Shofar sounded at the conclusion of Yom Kippur, the holiest of days for the Jewish people. Those same heart palpitations occur when the ark is opened in my Synagogue to reveal the five Torah scrolls nestled in the beautiful wooden vessel. As I scan the scrolls, the same text given to Moses on Mount Sanai, I see the history, pain and triumph of my people. I see the slavery in Egypt where we built the pyramids block by block under the scorching sun and Pharaoh’s whip.

I see our expulsion from Jerusalem under the mighty hand of the Romans as we carried the menorah from the destroyed temple to Titus Gate in Rome. I see the Spanish Inquisition and the expulsion of the Jews to faraway lands under King Ferdinand and Queen Isabella. Perhaps most vividly, I see the pogroms against my great grandparents in Vilnius, Lithuania, in the late 1800’s and the death of six million Jews, including from my own family, in the Nazi gas chambers in the 1940’s. And, I see the triumph in the modern-day miracle that is the State of Israel. As I watch these Torah scrolls brought out of the ark for the congregation to see and read from, I feel a sense of calling and urgency: to work every day for my own people and for all people — the past and future wrapped all in one.

This felt sense of duty as a white, Jewish woman has long been with me, although it has taken deep reflection and inner work to come to a clearer understanding of what it means and how to act on it. It is rooted not only in my Jewish identity but in my personal history as an immigrant. I was born in apartheid South Africa, raised on a farm in Israel and have lived in the United States for the last 20 years. I have spent most of my adult life working to build community and creating a more just society through such nonprofits as Artists for Humanity (an organization providing paid creative opportunities for Boston’s youth) and My New Red Shoes (an organization offering services for homeless youth in Palo Alto, Calif). But in recent years, that spiritual journey has taken me down a new road; I have become an artist.

Through my studio practice, it became clear to me that art can catalyze engagement and activism. My aim, when I sit down to work, is to use my art and voice as a vehicle for conversations that transform bystanders into activists. I wanted to create art that would instill in others that awesome, heart-palpitating urgency – art with the power to shake viewers out of complacency and move them to act. Often my starting point is my Jewish identity, the ritualistic objects or the stories of my tradition, but very quickly it moves to a universal place. More often than not, the visual story becomes about acceptance, humanity and caring for the other as I seek to externalize my own inner call. 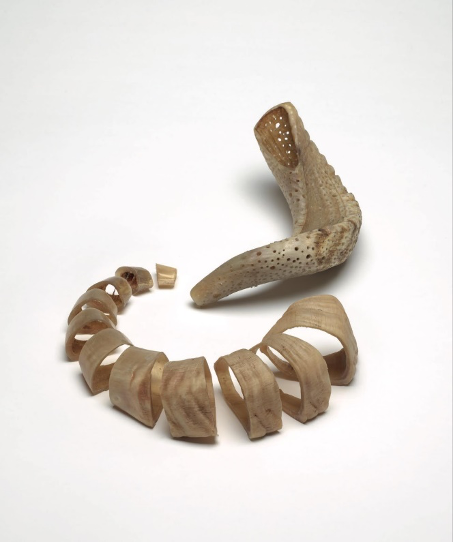 For instance, in my sculpture, The Sound of Silence; Tekkiah, Shevarim, Teruah, I altered two shofarot. The shofar is an inanimate object. It can only be activated with the intent and breath of the blower. This object, which had such a meaningful impact on me at the close of Yom Kippur, sat utterly effete in my studio. To me, the contrast offered a palpable reminder: Like the shofar, our intentions can sit unused on a shelf, looking pretty all year. Only when we act on them does their power become realized. 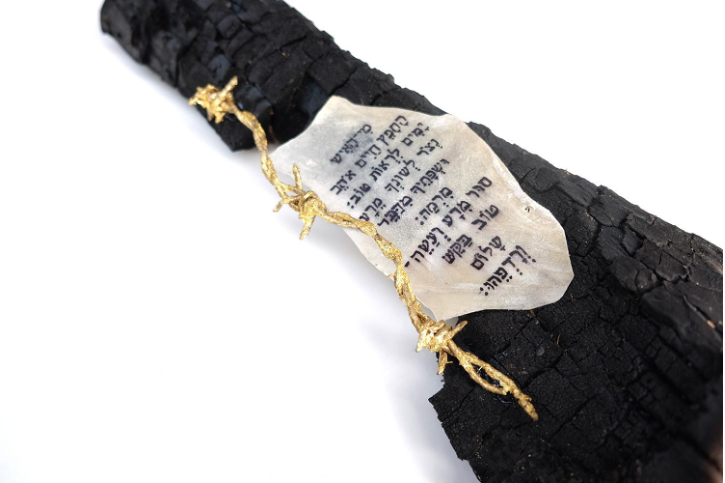 The mezuzah is another Jewish ritualistic object that has always held great meaning for me. In Jewish tradition, the mezuzah is often affixed to the right doorpost of a Jewish home and contains a scroll inside with two passages of scripture from the book of Deuteronomy. Traditionally, these passages address Jews’ covenant with God and serve the purpose of reminding inhabitants and visitors that one’s home is a holy place. To me, it has always served as a reminder of what is sacred inside – the people and the values I hold dear. In Psalms 34:15 – Seek Peace and Pursue It, I created a mezuzah that more clearly illustrated what this object means to me by replacing original biblical text with a passage from Psalms 34:15 which, when translated from Hebrew, reads:

Keep your tongue from evil

and your lips from telling lies.

Turn from evil and do good;

seek peace and pursue it. 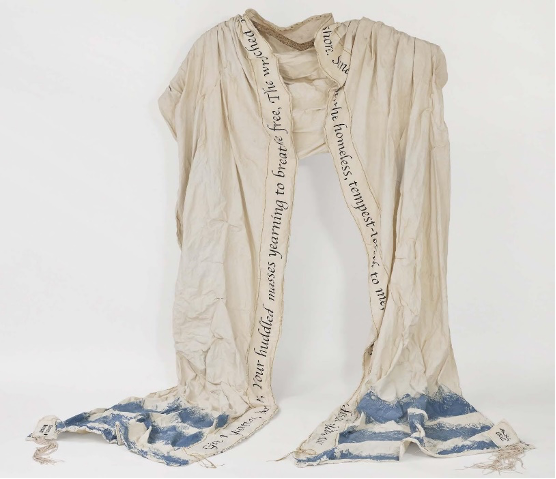 Caron Tabb, “Let Us Pray; Give Me Your Tired, Your Poor, Your Huddled Masses Yearning to Breathe Free”

Such works as Sound of Silence and Psalms 34:15 offer a deeply personal reflection, illuminating how I interpret and internalize the meaningful symbolism of Jewish ritualistic objects for myself. Let Us Pray; Give Me Your Tired, Your Poor, Your Huddled Masses Yearning to Breathe Free and similar works offer a more pointed call to action. Taking the form of a monumental Jewish prayer shawl, or Tallit, this piece transforms a very familiar item of Judaica, which carries much symbolism, into a personal call to everyone who views it to present and enshrine a fundamental Jewish biblical tenet: caring for the stranger.

On the Tallit, I inscribed the words written by Jewish poet Emma Lazarus and famously included on the base of the Statue of Liberty: “Give Me Your Tired, Your Poor, Your Huddled Masses Yearning to Breathe Free.” I also included 13 tassels, reflecting the 13,000 immigrant children held by authorities in various detention centers around the United States at the time the piece was completed in 2019. In this instance, my work points to a specific issue and quite literally draws viewers into that issue.

By following my calling and using the symbols and teachings of my Jewish faith to create art that inspires others to take action, I have been honored to connect with many others working to bend the arc of justice. Notably, I was invited in 2020 to participate in the Rothko Chapel Luce Foundation Cohort. As part of the cohort, I had the unique opportunity to meet with (albeit, via Zoom) artists, activists and spiritual leaders from around the world for a year-long program centered on the nexus of community activism and spiritual engagement. For me, meeting with and listening to the other members of this group brought into focus the central role that artivism (art and activism) plays in my life. Using my art, which comes from a deep Jewish place, to engage others in conversations around difficult social issues while elevating others has become my calling and the sole purpose of my art.

With my artivist mission clarified by this powerful network, I have since undertaken my farthest-reaching project to date – Be the Change. Created in partnership with the Jewish Arts Collaborative in Boston, Be the Change is an artivism movement consisting of 18 works of public art commissioned in three cities across the United States by 18 artists addressing social justice issues close to them. As one of the 18 artists and as co-curator for the project, I have had the great privilege of working with my fellow artists and project partners to find innovative ways to increase the impact each artwork can have. One important way we have accomplished this goal is by helping each artist connect with a service organization working to solve the issue at the heart of the installation. So far, six works have been installed in Boston, six in Cincinnati and six more are coming to Los Angeles in 2023.

While the artists selected for Be the Change are not all Jewish, the idea for the project is deeply rooted in Jewish ideals. Specifically, the project grew out of a series of sculptures I created that were inspired by Jewish tzedakah boxes. The word tzedakah is Hebrew for charity, derived from the root word tzedek, meaning justice or righteousness. Jewish tradition teaches that giving tzedakah is a religious imperative, even for those who have little to give. It is customary to place money in a Tzedakah Box just prior to Shabbat, holidays, and other special occasions and then donate it to those in need. For my 2021 solo exhibition at Beacon Gallery in Boston, I created two tzedakah boxes that I dedicated to two women who have inspired me in countless ways: Ruth Messinger, former director of the American Jewish World Service, and Chaplain Clementine Chery, founder of the Louis D. Brown Peace Institute.

Through conversations we had about creating and dedicating a tzedakah box in her honor, Ruth shared a long-held vision of a large-scale tzedakah box installed outside the Met that reads “Change,” a play on words for both giving and activating the giver. That conversation was all it took to transform the notion into a nation-wide public art initiative. 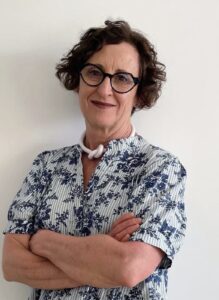 Caron Tabb was born in apartheid South Africa, raised on a farm in Israel from the age of eight and, and has lived in the US for the last twenty years. After years working in the nonprofit world, she turned her focus to art. These key biographical elements and her passion for social justice issues deeply impact her artistic practice. In addition to traditional painting and photography, she incorporates found objects and unconventional materials into her work. Her conceptual mixed-media and instillation pieces address issues of social inequality, racial justice and, feminism as seen through the lens of her deep Jewish identity. When questioning her role as a Jewish, white woman, and a human being today, her goal is to raise the level of discourse, increase empathy and engage people in difficult conversations about a just and equal society. Her art serves as a voice and a vehicle for conversations about what it means to be an American in this day and age. Caron holds a B.A in Education and a M.A in Nonprofit Management both from Hebrew University in Jerusalem.