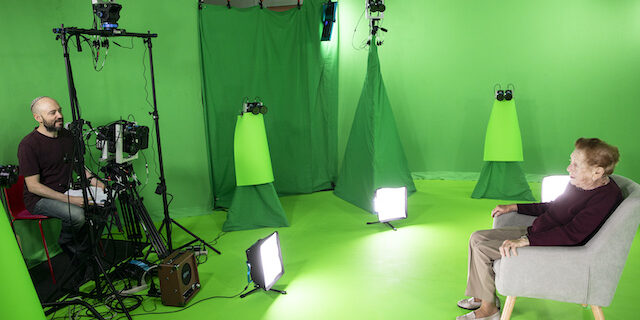 A photo essay by Breann Fallon

“Never Again” became an emotional catch cry after the atrocities of the Second World War and the Holocaust. Of course, even though these words are still proclaimed genocidal violence continues to occur the world over. One wonders how much more humanity must endure before we learn the lesson. 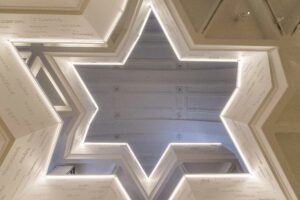 The Sydney Jewish Museum is a “living museum,” where history is kept alive in order to teach such important lessons from the past. Established in 1992 by the generation of Holocaust survivors who came to Australia, this year the Museum celebrates its 30th birthday.

These founding survivors envisioned the Museum as a permanent home to hold their stories and personal objects, memorialise those who were murdered during the Holocaust, and teach the lessons from the past for generations to come. The Museum is home to exhibitions on Judaism, the Holocaust and Human Rights, and is formed around a central memorial in the shape of a Star of David engraved with names of survivors and victims of the Holocaust. 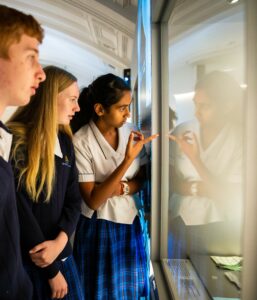 In addition, the Museum is committed to keeping the voices of Holocaust survivors alive with over 40 survivors continuing to speak and share their lessons with the Museum’s visitors. As Holocaust survivor Yvonne Engelman OAM[1]states, “We are the living historians. I’ve been coming to this museum every Tuesday for 29 years now . . . because the only way that we can perpetuate the memory of the six million which have been murdered is by educating the young people.”

Pre-COVID, tens of thousands of members of the general public and an additional 30,000 school students visited the Museum every year to engage with this history on a personal level and take its lessons forward with them into the future. For the vast majority of the Sydney Jewish Museum’s visitors, meeting a Holocaust survivor face-to-face is one of the more impactful experiences of their lives. As the Director of Faith and Mission at St Vincent’s College Potts Point states, “If you haven’t taken your students to the Sydney Jewish Museum, you haven’t prepared them for life.” This sentiment is supported by the 2022 Gandel Holocaust Awareness Survey conducted in Australia revealed the following:

To hear the recollections of the past, have a conversation and ask questions, brings history into the present in a visceral and effective way that fosters a more cohesive society. As mentioned above, the museum is incredibly fortunate to have 40 survivors that share their stories in order to facilitate this positive change. However, the difficult reality of working with Holocaust survivors is the knowledge that none will be able to share their recollections indefinitely. 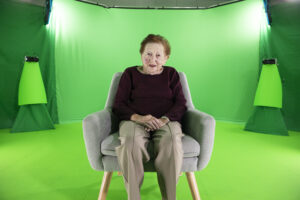 The Museum has engaged in numerous filming projects over the years in order to collect the first-hand accounts of survivors in multiple ways for posterity. From long form testimonies to short clips to FAQ style videos, there are thousands of hours of testimony in the collection. However, it is not simply the experience of hearing a survivor, it is the power of meeting a survivor face-to-face and being able to interact that is critical to preserve. The question is: how do we keep these conversations alive?

Over the summer of 2020-2021, in collaboration with the University Southern California’s Shoah Foundation (founded by filmmaker Steven Spielberg) the museum embarked on a project entitled Dimensions in Testimony that was created in order to keep the voices of Holocaust survivors alive for future generations while also being able to speak directly with the survivor. Six survivors were recorded using a 23-camera rig, artificial intelligence (AI), and next-generation language processing in order to create an interactive biography capable of lifelike conversation.

Survivors Olga Horak OAM, Eddie Jaku OAM, Yvonne Engelman OAM, Kuba Enoch OAM, Paul Drexler, and Francine Lazarus were filmed in order to capture a range of ages and experiences including ghetto, camp, escape, and hiding narratives of survival. Over an intensive five days, each survivor answered around 1,000 questions about their experiences pre-war, during the Holocaust and post-war. They were also asked about interests, pearls of wisdom, messages and hopes for the future. From questions like “when were you deported” and “how did your experience impact your faith” to queries such as “do you like Vegemite,” these interactive technologies are critical to ensuring the experience of meeting a survivor, not simply hearing them. Future visitors will continue to have authentic and meaningful interactions with important eyewitnesses to history.

As these interactive biographies go through various stages of testing before they are ready for display and engagement with the public in the latter part of 2022, the importance of such a project was made clear to the team at the museum in several ways. 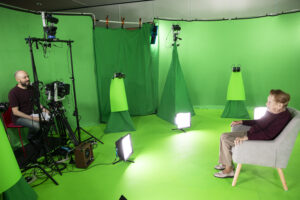 First, when interacting with this technology, the turn of phrase used by visitors remains to be personable and empathetic, meaning the personal connection to the survivor is maintained, regardless of the fact that the survivor is not present. As such, while still early on in the process, it appears as though this technology will preserve the ability of individuals to have impactful and affecting dialogue with a survivor.

Second, often students who meet a survivor are reticent to ask questions for fear of offending the survivor. However, initial interactions between students and this technology show increased confidence in asking questions and a greater variety in the content of their queries. Finally, and perhaps most critically, two of the survivors, Eddie Jaku OAM and Kuba Enoch OAM, passed on before they were able to see their interactive biography come to fruition. This loss has highlighted the importance of preserving the survivors’ legacy before it is too late. Moreover, this technology affords the families of these two survivors the ability to converse with Eddie and Kuba indefinitely, should they wish.

Looking at the world as it is, we might argue that the world has yet to learn the lessons of the Holocaust or the numerous atrocities since then. To combat such violence, for-purpose organisations like the Sydney Jewish Museum will continue to educate and share the stories of the past in order to, hopefully, impact the shape of the future. Technology is an ally in preserving the stories, interactions, and impact of Holocaust survivor as we move towards the inevitable day when they are no longer able to speak for themselves. Hopefully future generations will engage with these human stories and the plea of “never again” will be a forgotten memory. As Holocaust survivor Eddie Jaku OAM states, “If we don’t learn from our past we will not have a future.”

[1] The OAM, or Order of Australia medal is an honour that recognises Australian citizens and other persons for achievement or meritorious service. 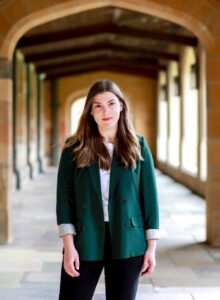 Dr Breann Fallon is the Co-ordinator of Research and an educator at the Sydney Jewish Museum. Her research interests include religion and violence, genocide, human rights, cinema, material religion, and gender, having published on all of these topics. She is the host of the documentary Trafficked to Australia, an advisory board member of the Bulletin for the Study of Religion, associate editor of the Religious Studies Project podcast, and an ambassador for the Be A Mensch campaign. Breann has appeared on Australian Broadcasting Corporation (ABC) Radio National programs “Religion and Ethics,” “God Forbid” and “Earshot,” as well as 2SER radio, plus the podcasts GLAMCity and Genrelisation. Previously she taught in the Studies in Religion department at the University of Sydney.