Looking to the Past to Memorialize the Pandemic Present 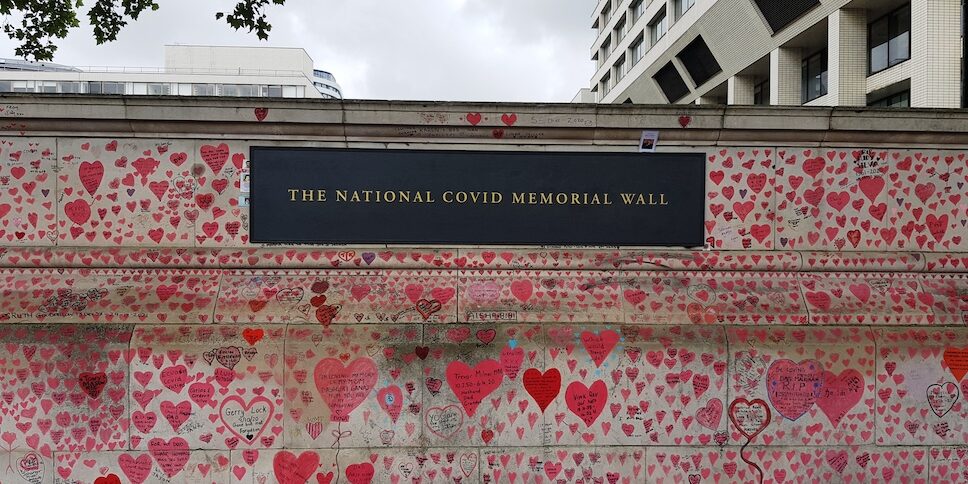 A mile from my house are three First World War memorials standing just a couple of hundred meters apart in the heart of the English city of Exeter. Though mostly ignored now by passers-by, they each have particular stories. These stories prompt us to think about a current situation unfolding across Britain, and indeed many societies: the emerging memorialization of the Covid-19 pandemic.

The desire for public remembrance is arising even as we exist in a world still heavily conditioned by the virus’ continuing effects on our daily lives, but we should not imagine that the process is simple and uncontested. A brief look at past memorials is instructive for how we might think about the present desire to memorialize the impact of Covid-19.

Emerging Pandemic Memorialization and its Challenges 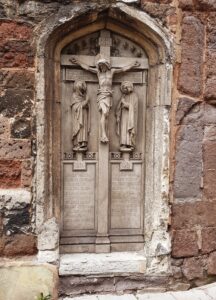 A useful place to start is with a small, unobtrusive war memorial built into the wall of the medieval St Olaves church in central Exeter. Nowadays it seems like an almost timeless relic but, crucially, it is actually a post-war replacement for the original, temporary “street shrine” set up during the conflict itself. Up and down Britain, during the hostilities, local communities felt the urge to build their own makeshift public memorials for fallen loved ones. In places like St Olaves these became the sites for more permanent monuments.

Some people may find it strange to speak of memorializing the Covid-19 pandemic when we are still in the midst of it. Yet it should be recalled that the urge to memorialize does not only surface after a society has faced a collective trauma but even during it. At the present time we see this in a constellation of memorialization activity already underway: the grassroots creation of memorial walls and gardens, plans for grander institutional memorials, public remembrance events, and digital forums for sharing experiences of loss.

Like the St Olaves memorial, the more permanent forms of pandemic memorialization will take time to coalesce, and indeed the comparison with the early twentieth-century memorial highlights the unpredictability of what gains traction in the longer term. The last major world pandemic, the influenza (or “Spanish Flu”) outbreak of 1918-1920, may have globally killed more people than the First World War but is strikingly absent from public consciousness. Part of this is no doubt due to the attention garnered by the end of fighting in 1918, but this absence also highlights the inherent difficulty of memorializing a pandemic.

Although we may point to the brave acts of health workers, the majority of deaths from Covid-19 cannot be framed in a narrative of heroic sacrifice in the manner of soldiers killed in war. And the nature of the deaths during the 1918-1920 pandemic—most often in private–was less suited to a story of collective struggle than military confrontation with opposing nations. Politicians have sometimes reached for language of war during the current crisis, but the virus being fought is invisible, devoid of ideology, and will not be finally defeated in a singular defining moment.

The Covid-19 pandemic has not taken place against the distracting backdrop of world war and, in contrast to the early twentieth century, digital communications have allowed shared stories to emerge even during the most restrictive periods of social distancing. But it still remains unclear what traction its memory will have in the longer term. In my own experience of speaking to memorial activists, many tell of their fear that the victims of Covid-19 will be mostly forgotten by society at large.

A couple of minutes’ walk from the St Olaves memorial stand two much grander monuments erected in the aftermath of the First World War: the Exeter City War Memorial and the Devon County War Memorial. How one small city ended up with two large memorials so close to one another is a now largely overlooked story of bickering committees representing rival branches of local government.

Realizing that they needed to differentiate themselves from one another, the memorials take quite distinct forms: one as a large cross and the other as a secular monument featuring bronze statues of wartime figures. They reflect the collective hesitancy, across Britain, regarding whether war memorials should or should not be overtly Christian. One committee saw the cross, with all of its attendant theological meaning, as the appropriate symbol through which to channel remembrance of the dead, while the other committee decided against the intertwining of war and religious redemption.

The rivalry between two of Exeter’s First World War monuments is a reminder that the process of establishing public memory can be contentious—a feature even present in the origins of the small St Olaves memorial nearby. In 1917, local newspapers reported on an evening gathering to protest against the original memorial shrine, with speakers denouncing it as a site of superstitious ritual that distracted mourners from biblically-centered Protestantism.

Memorializing the Pandemic in Today’s Britain

Over the hundred years since the First World War, the influence of the church has declined markedly but amidst emerging memorialization of the pandemic we still see glimmers of a similar tension.

In central London the two major pandemic memorial initiatives are the National Covid Memorial Wall and the St Paul’s Remember Me project which is currently transitioning from a digital to physical presence. The former is essentially secular, consisting of over 150,000 red hearts hand-drawn onto a wall bordering the Thames (and pointedly located opposite the Houses of Parliament). The memorial planned for the inside of St Paul’s Cathedral, which has received more fulsome government support, is intended to be inclusive of all faiths but can hardly disassociate itself from its Christian frame. That it has been championed by the socially conservative Daily Mail newspaper only adds to a sense that this is a project more rooted in culturally established forms of remembering. 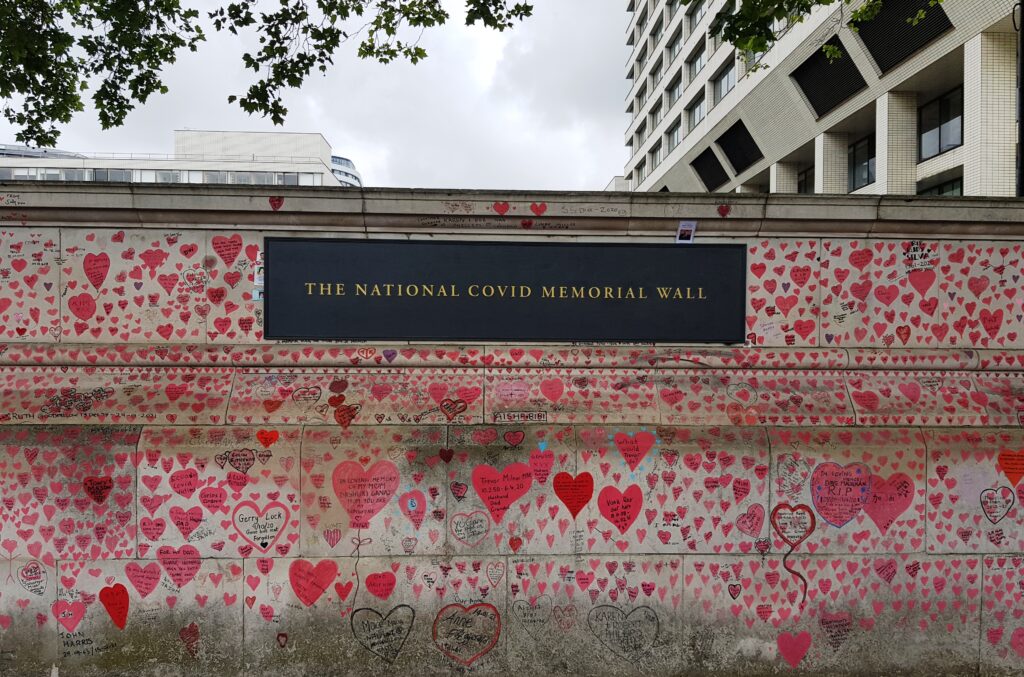 The National Covid Memorial Wall, photograph by the author

The liminal place of Christianity in British Covid memory was also curiously apparent in the BBC’s coverage of the first “National Day of Reflection” on the pandemic in 23 March 2021. In the lead up to the midday silence, the state broadcaster’s television coverage deferred to prayers from Winchester Cathedral and, in the evening, the final words before the 8pm lighting of candles were given by the Archbishop of Canterbury. It is unclear whether the BBC consciously felt that this moment of national contemplation called for culturally familiar language of Christian mourning or whether, in the face of an unprecedented event, they were simply unsure where to point their cameras.

Memorial ribbons at the Runnymede National Trust park, photograph by the author

For the most part there has been little open acrimony in Britain surrounding early attempts to memorialize the pandemic, but the potentials are certainly present. Most initiatives have attempted to studiously avoid debates about government policy on Covid-19, but the National Covid Memorial Wall is unapologetically political in its demands for a public inquiry into the actions of the state. The government’s own nascent plans for a national memorial seem liable to head into choppy waters–something already hinted at by reports of hiring an architect associated with a costly and never-completed vanity project from Boris Johnson’s tenure as Mayor of London.

How societies establish patterns of remembering (and forgetting) the Covid-19 pandemic will be gradual, messy, and unpredictable. Looking to precedents from history can help us anticipate some of the dynamics and, in the process, just possibly also reanimate some of the markers to past events that lie scattered across our landscapes. 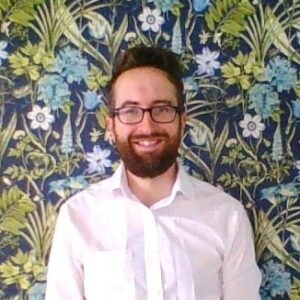 Dr David Tollerton is a Senior Lecturer at the University of Exeter. His most recent book is Holocaust Memory and Britain’s Religious-Secular Landscape published with Routledge in 2020. During 2019-20 he was awarded a Leverhulme Trust Fellowship for his work on Holocaust memory in Britain, and in 2021 he is leading an Arts and Humanities Research Council project on early memorialization of the Covid-19 pandemic