Reimagining the World with Matthew Russell 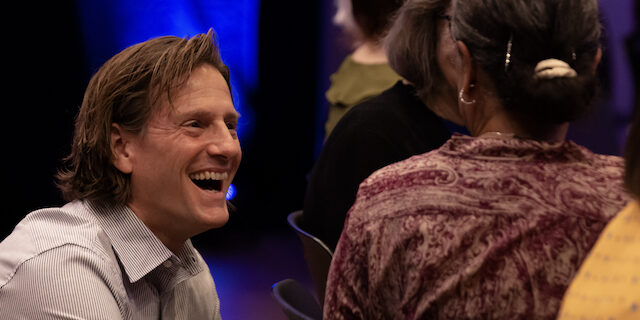 The Rev. Dr. Matthew Russell and I are having coffee on a weekday morning – actually he’s having mint tea – at a spiffy, new coffee house just off I-10 near Gessner. The conversation is casual, and the jeans-wearing Methodist minister is affable and engaging, but as I ask him my reporter’s predictable questions, it becomes clear that he’s God-haunted. And has been his whole life.

Matt Russell’s obsession – my word, not his — affords him focus, grounding, perspective, “an opportunity to reimagine the world.” Executive pastor at Chapelwood United Methodist Church in Houston, he has been reimagining through the years, through any number of distinctive, disruptive chapters in his life.

“Matt is really unique in the religious spectrum,” the Rev. James Bankston, a retired minister at St. Paul’s United Methodist Church in Houston, told me. “He combines passion from existential experience with intellectual honesty and depth. He nevertheless is approachable and open. If more religious leaders had his qualities, people would be moving toward the faith instead of away from it.”

Russell, 55, grew up in Carrollton, a middle-class suburb of Dallas, where his family regularly attended a fundamentalist Methodist church with charismatic tendencies. They also volunteered at halfway houses on Saturdays in an effort to put belief into practice.

Although the church was an integral part of his life, he soon realized, metaphorically, that the “Jesus T-shirt” he was wearing was too small. Still, he didn’t trade for a Grateful Dead shirt or a Dallas Cowboys commemorative jersey; instead, he sought a more commodious Jesus shirt and continued to wear it through personal tribulation, addiction, doubt and deep questioning.

When Russell was 13, his mother was diagnosed with brain cancer. As he explained to Maggie Gordon of the Houston Chronicle in 2018, the church told the family the cancer was the result of an unconfessed sin. “I knew it was wrong,” he told Gordon, “but then again, it was the belief system I’d been taught, and it makes sense if you’re in the middle of it — because why would a person like my mom get cancer?”

He continued to question, to wrestle with his faith, to “deconstruct” the story he had been given as a child. The questioning continued at Texas Tech University in Lubbock, where he majored in philosophy, and in Mexico City, where he volunteered for a year with nuns from the Sisters of Mercy. The sisters were working among the poorest of the poor

His experience with the nuns, whose orphanage was next to a trash dump where babies and children were regularly left to die, affected him profoundly. He found God there. “Hope bubbles up in the weirdest of places,” he tells me.

Russell went back to Texas Tech for his degree and a few years later enrolled at Fuller Theological Seminary in Southern California, receiving his masters of divinity degree in 1998. He also was named associate pastor at Houston’s Chapelwood United Methodist Church. For nearly a year, his mission at Chapelwood was to interview parishioners who had left, trying to determine why the church had not met their needs. In conversations with 70 people during that year, he gradually came to realize that many had found meaningful spiritual experiences elsewhere, often in Alcoholics Anonymous.

“I realized that I would like to create a church for people who hate church,” he recalls. The result was Mercy Street, a congregation within a congregation whose parishioners have spent time in halfway houses, in jails and prisons, on the street. They were “spiritual refugees.” At Mercy Street, they felt safe.

So did Russell, himself a recovering addict who still attends weekly 12-step sessions. “These relationships,” he wrote in a follow-up email, “constitute some of the longest-term and deep relationships in my life. It is within these connections that my life is held together and grounded. While it might be a bit of hyperbole, I truly believe that authentic connection is antidote for just about all human maladies.”

After a dozen years with Mercy Street, he went back to school, earning a doctorate at Texas Tech in 2010 and writing a dissertation entitled “Women’s Counternarratives of Redemption.” His work earned him a postdoctoral fellowship at the University of Cambridge in England.

Back in Houston with wife Michelle, a former marriage and family therapist, and their three teenage sons, he founded nonprofits like Iconoclast Artists, a poetry program for at-risk students in the Houston area, and Project Curate, an agency that supports collaborative responses to issues of injustice and inequality. Project Curate seeks to dismantle barriers that exist along the lines of sex, gender and political orientation.

“I find myself to be a border-crosser,” Russell says, “working in spaces that are deeply divided on race and economics.”

His sermons — conversational, seeking rather than preaching — are a potpourri of psychology, poetry, art, philosophy, theology, Monty Python absurdity and etymology. (He loves teasing out the root meaning of words, including, for example, “religion,” from the Latin religare, to bind together.)

Amid the doubts and questioning, the constant probing and experimentation, he often hearkens back to one bedrock truth. “All of Jesus’ words can be summed up in one word,” he said in a sermon a few years ago, quoting the Spanish poet Antonio Machacado. That one word is “Wakeup.”

“Wake up!” Russell echoes. “There is a new way of living together in this world. . . .” As proclaimed by “this crazy man named Jesus,” the new narrative is “the way of suffering, the way of love. Loving our neighbors as ourselves, Doing good to those that hate us. Standing with the destitute, the prostitute, the addicted, the depressed. . . .”

Living in a nation that desperately needs that sense of connectedness, Russell finds in both the Hebrew text and the New Testament a divine presence that expresses itself in expansiveness, engagement. “It’s a big table!” he says.

Sitting at our small table as the lunch crowd begins to gather, Russell laughs and shakes his head at the direction his life has taken. “I’ve tried to shake Jesus off of me like a bad relationship,” he says. It hasn’t happened yet. 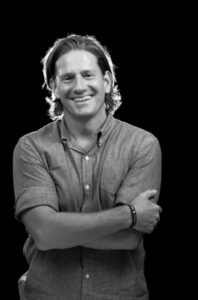 Matthew Russell is an academic, activist, pastor, professor and teacher. He is on staff at Chapelwood United Methodist Church in Houston and is the Executive Director of Iconoclast Artists and projectCURATE (a non-profit educational and social enterprise incubator that seeks to build bridges across cultural, economic, religious and racial divides in Houston).

He has taught at Duke Divinity, Fuller Seminary and completed a two-year postdoctoral fellowship at the University of Cambridge in Psychology and Religion.  In 2010, he completed his Ph.D. at Texas Tech University in Human Development where he explored how women construct alternative narratives of redemption from years of sustained trauma and abuse.

Prior to this he planted and pastored a church called Mercy Street, a “church for people that hated church”.

Matt has worked extensively with ex-offenders and recovering addicts.   In collaboration with Marlon and other Houston educators he is developing innovative curriculum for public schools which seek to provide pathways of learning and economic opportunity for kids in the inner city.

Matt is married to Michele and they have three wonderful, crazy boys: Miguel, Lucas, and Gabriel.