The Space Between: Interconnectedness and Identities 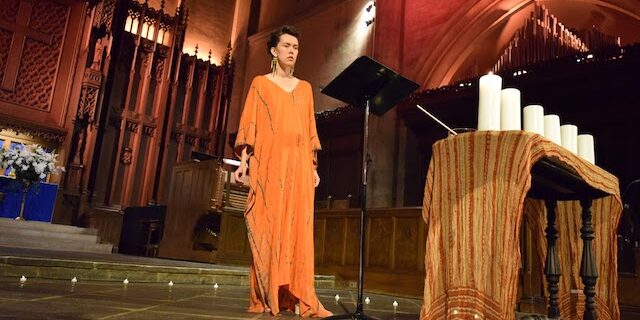 This reflection was recently shared in Still Life, a weekly letter on art and spirit by Michael Wright. We are reposting with thanks to Michael and Fahad.

Resonance Collective can be categorized as exploration of cultural synthesis: East meets West, traditional Flamenco written for classical guitar, Hindustani and Western music in conversation, a solo for the European piano influenced by the music of indigenous Americans, but this is an oversimplification. Part of our natural human inclination is to simplify our understanding of the world and split things into binaries, even when what we are looking at is much more complicated, and culture, especially cultural identity, is something I’d certainly put in the “more complicated” category.

I’ll give an example: being a first generation American (my parents are immigrants from different Middle Eastern countries), people used to ask me: “Do you feel more American or Middle Eastern?” A classical “this or that” question which haunted me in my youth, but something funny happened in my teenage years that offered me a clearer understanding of how to navigate my multicultural identity.

When I turned 16 years old, in a perfect “East meets West” moment, my parents independently gave me the same gifts for my birthday: an English translation of the 13th Century Sufi mystic poet Rumi, and a copy of 19th Century American poet Walt Whitman’s Leaves of Grass. I took this strange coincidence as a sign and read both with special attention. Perhaps it was how they entered my life together, but when I read these poets, separated by centuries, continents, and culture, I see the same spirit in their words. 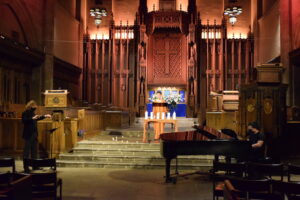 Performance of “The Space Between” at First Congregational Church of Los Angeles, featuring Laurel Irene, Jaxon Williams and Richard An performing works for soprano, guitar, and piano.

Yes, their poetry is framed by contrasting time and place, but the underlying energy, the reverence for the sacredness of this world, great and small, points at the same truth. Their understanding of who we are in relation to the Mystery (Mystery with a capital M), both inner and outer, gave me a deeper understanding of myself and that great ineffable Truth.

Here’s the thing about Truth (Truth with a capital T), both the spiritual kind and the truth of who we are is like a diamond: multi-faceted, refracted, complex. It’s both multitudinous and one single unified understanding, complete and whole in its multiplicity, and I’m not sure any one culture or tradition can claim the whole of the truth.

My own cultural identity isn’t a this or that, or even a this AND that, it’s a combination of a mixed Middle Eastern heritage, plus the Pacific Northwest where I grew up, the Filipino family I married into, and a hundred other cultural touch points that have created a unique goulash that is “who I am,” one constantly growing in density and complexity.

My spiritual beliefs are similar, they are slowly revealed through every artistic encounter, religious teaching, or any other such sacred experience that seems to point at a deeper understanding of the truth, even when those ideas seem to clash against each other. If our personal identity and beliefs are, in fact, an amalgamation of the ideas we’ve previously encountered and consciously or unconsciously synthesized, perhaps it’s not so surprising that John Harbison and Robert Bly, at the time two American, middle aged men of European descent, would choose to engage with the writings of Mirabai, a 16th Century Bhakti Saint, through music and poetry. 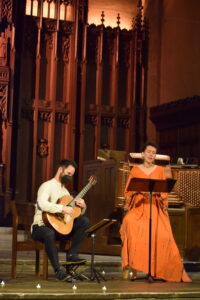 Performance of “The Space Between” at First Congregational Church of Los Angeles, featuring Laurel Irene, Jaxon Williams and Richard An performing works for soprano, guitar, and piano.

How we navigate which beliefs and values speak loudest to us in this increasingly interconnected world can spark uneasy conversations about cultural ownership and appropriation, but it’s nothing new to reach outside of your own tradition to seek other facets of the truth. Every society has people who feel a natural inclination towards philosophies and practices that contrast with their own cultural background.

My point is, sometimes what speaks to our souls chooses us. Who we are is not one or the other but both at the same time, and also somewhere in the space between, and a whole lot more. As Walt Whitman says:

Do I contradict myself?

Very well then I contradict myself,

(I am large, I contain multitudes.)

Mirabai too reflects this understanding. Her poetry, a declaration of her spiritual marriage to Lord Krishna, is both sensual and holy; a bringing together, a joining, a union. We are not just finding our way between body and spirit, we are body and spirit together, a complex, rich being greater than the sum of our parts while also individually part of something larger than ourselves. This is not a contradiction but a majestic truth; an understanding that cannot be reversed once we’ve experienced it for ourselves. Or, as Mirabai says:

I have felt the swaying of the elephant’s shoulders;

and now you want me to climb

on a mule? Try to be serious.

Consider, for a moment, what is possible when you step towards that big, messy, truth, the one that doesn’t fit inside the boxes we love so well. What might you see when you step into that open field, the center of the circle, in the space between all things? 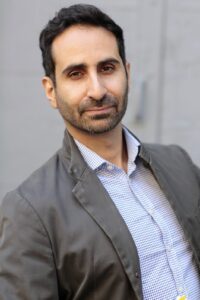 Fahad Siadat creates interdisciplinary storytelling works, folding together words, sound, and movement into ritualistic narratives. His work is described by the press as “Exceptional” (LA Times), “hypnotic” (Backstage) and having “a sophisticated harmonic vocabulary” (San Diego Story) with “characteristic vivaciousness” (Theatre Scene). Fahad is the director of the Resonance Collective, a multifaceted organization which explores the intersections of artistic and spiritual practice, as well as the new music vocal ensemble HEX. As a music director he has worked with suchgroups as Long Beach Opera, Rosanna Gamson/World Wide, and Overtone Industries. In 2012, he founded See-A-Dot Music Publishing, a company devoted to the advocacy of adventurous choral music. His music has been performed in Europe, China, and across the United States. www.fahadsiadat.com