The Absence of Bodies 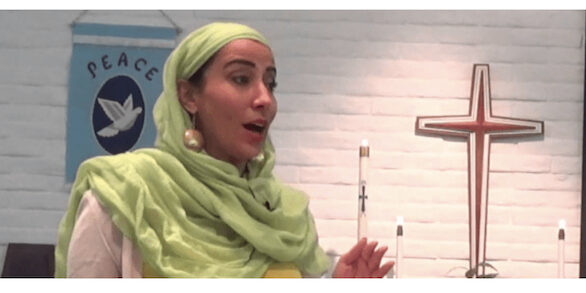 During the early months of the pandemic, I was a professor of interreligious education at a school of theology. I was preparing students for ministry in multiple religious traditions and contexts. I spent the first six months of the pandemic with severe asthma and was unable to leave the house for days at a time.

In the small narrow spaces of my own home, I was connecting and teaching students who were caretakers of grief, stewards of pain for whole communities and often already hit with the forces of legislative terror perpetrated by an administration that announced such policies as banning immigrants by tweet. Everyday I wondered how much more trauma communities and leaders could endure.

I think a lot about bodies. Although the first poem was written a decade ago, before the pandemic, I felt the pain of activists and organizers who were not given or could not take spaces for rest. Even as they worked for justice, we celebrated the sacrifice of their bodies to improve conditions for other bodies. This paradox remains central in my art and scholarship. Does God call us to sacrifice our health to achieve a better world? How do we serve as models of healing justice when justice is killing us? The second poem interrogates this fact. The absence of bodies, their presence and the somatic experience of collective joy, was gone for me in the pandemic. Those moments of joyous solidarity – gone.

I don’t have answers. I have, however, evolved in my understanding, so that now I don’t believe the pursuit of justice should include self-abnegation or flagellation. Pain will only produce more pain. Something has to look and feel different.

Some of us are

not allowed a personal

crisis or time to fall

We are too busy

the crushing of our

And then in that moment,

we forget we have hearts

too, holed and that we

We cannot do people-

lines of men and women

made in this imaginary

are so cut open

walking into this room

does not even know

I miss the body of bodies

I miss your crush on mine

thumping to the bass

not knowing where you end,

I begin to see lost limbs

Shadowed, people are not people?

When alone is all we have.

not because I want to stay

Flowered with brown on brown

bring me back to the world

Where you coming up on me

Didn’t strike fear into the

I miss you body of bodies.

Najeeba Syeed is the El-Hibri inaugural endowed chair and executive director of Augsburg’s Interfaith Institute. She is an expert practitioner in the fields of conflict resolution, mediation, and interfaith studies. An award-winning educator, she has taught extensively on interreligious education and published articles on faith and community-based conflict resolution, restorative justice, and interfaith just peacemaking. She previously served for 10 years as an associate professor at the Claremont School of Theology. She also held faculty positions at Starr King School for the Ministry and Chicago Theological Seminary, where she was most recently associate professor of Muslim and interreligious studies. She has served as the co-chair of the American Academy of Religion’s Religion and Politics Section and was a member of the Academy’s Religion, Social Conflict, and Peace Section.

She has been been featured in the Los Angeles Times, on NPR, PBS, on the Tavis Smiley show, worked with Oprah Winfrey on two projects and has been quoted by print and news media around the globe. Her speaking schedule has included keynotes and named lectures around the country at major universities including Duke University, La Sierra University, Seattle University, University of Southern California, Harvard University, Boston Theological Seminary, University of Toledo, Eastern Mennonite University and her alma mater, Guilford College